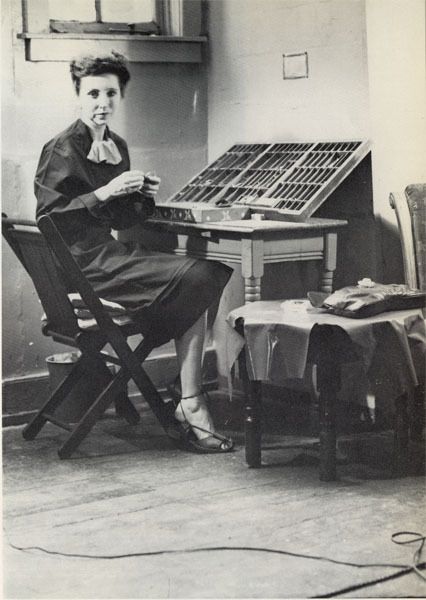 Anaïs Nin fled France before the German invasion for New York and unable to find a publisher for her works she resorted to self-publishing.  Nin had never intended to become a printer-publisher of her own work. Perhaps she wouldn’t have bought a press if she didn’t have the additional motivation of helping her boyfriend. For years, Nin had funneled her husband’s money to support Henry Miller and other artist friends. Her decision to establish a press was motivated by her maternal attitude toward her current lover, Gonzalo More. She was compelled to secure for him productive and meaningful work. He, a chronically underemployed communist from a wealthy Peruvian family, was intrigued with printing. His brother was a newspaper pub-lisher, and as a self-employed letterpress printer, More would be both proletarian work-man and romantic artisan. In December of 1941, Nin and More found a treadle-operated platen press for $75 ($1,072 in 2015 dollars). “The man said we could turn out Christmas cards on it, but not fine books,” Nin wrote, but “Gonzalo was sure it would work.” Nin borrowed $75 from one friend, and $100 “for type and trays” from another. Then there was only the space to find: she delighted in a third-floor attic of a very old wooden house at 144 Macdougal Street in Greenwich Village: “It was a skylight studio, ideal for the work . . . it was old, uneven, with a rough wood floor, painted black, walls painted yellow.” Rent was $35 a month; in comparison, she paid $60 a month for her apartment at 215 West Thirteenth Street. Nin and More bought “end paper, small lots which are not usable by big publishers, but ideal for us. Good paper.” By January the press had been delivered to the new space, and they borrowed a book from the library on how to print.

Anaïs Nin born Angela Anaïs Juana Antolina Rosa Edelmira Nin y Culmell; February 21, 1903 – January 14, 1977) was an essayist and memoirist born to Cuban parents in France, where she was also raised. She spent some time in Spain and Cuba, but lived most of her life in the United States, where she became an established author. She wrote journals (which span more than 60 years, beginning when she was 11 years old and ending shortly before her death), novels, critical studies, essays, short stories, and erotica.